Get involved; come help, it’s good for the community
and it’s good for our members!
Coats for Kids is starting a Capital campaign this year with a goal of $10,000. Our immediate objective is to raise money to pay for a permanent storage facility so that we may better serve Northern Wayne County. Donations can be made to Coats for Kids, P.O. Box 104 Lake Como, PA 18437 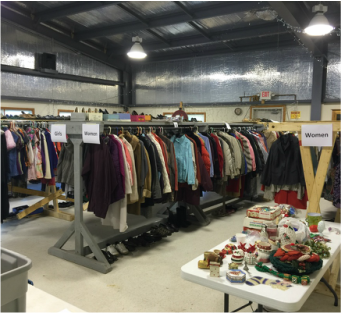 The primary reason of Coats for Kids is to help some of the needy families of the area, the event gives the members of the Lake Como and Shehawken Churches a good opportunity to work together while we collect, sort, set up the event, and give away the clothing, bedding, and footwear in addition to our namesake Coats for Kids, and coats for adults too!

The idea for Coats for Kids was the result of a men’s breakfast sponsored by both the Shehawken and Lake Como Churches to encourage fellowship between the men of both churches in the Summer of 2010.  The men’s breakfast was conceived and organized by Leo Cook, unfortunately Leo passed away before the first Coats for kids event, but we can rest assured that Leo would be proud of what the humble beginnings of a men’s breakfast has blossomed into.

The men of both churches decided to work together and start a community service project, which became Coats for Kids. There are many camps in Northern Wayne County, and they all end the season with large quantities of clothing in the lost & found, we realized we could get a good start for a clothing give-away from the generous donations from the local summer camps.  Between the clothing donated by the camps and donations from the public, we collected enough clothing, built some clothing racks, and had our first Coats for Kids clothing give-away in October 2010 in the fellowship hall at Shehawken Church.

The women of both congregations were quick to pitch in helping with the washing, sorting, folding, and organizing everything for the two-day give away event. What began as a men’s breakfast quickly became a project for everyone, men, women and children in both congregations.  It was obvious after the first year that the fellowship hall at Shehawken Church was too small to properly house the event, so for the second year, we were granted permission to use the fire hall by the generosity of the Northern Wayne Fire Department.  We have had the Coats for Kids giveaway at the fire-hall every year since.
Proudly powered by Weebly