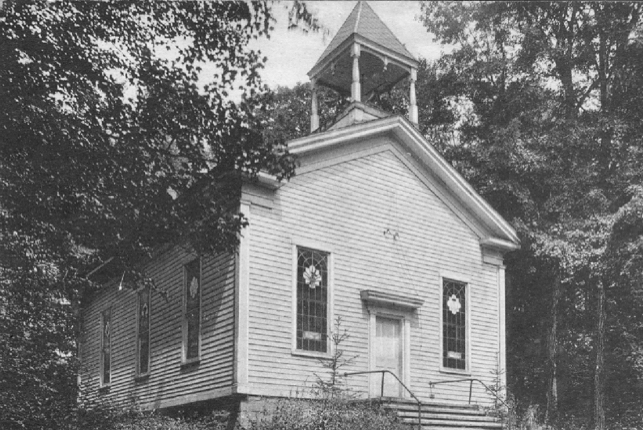 The Lake Como Methodist Church was founded in 1860, with Rev. Joseph Whitman as its first pastor.  The building was erected in  1861 at a cost of $1360 on land donated by Allison & Davidge Company, proprietors of the tannery.  The building contractor was William Kingsbury and the window sash was made by  George Barrager.  The land was deeded to the trustees: Lyman Woodmansee, J. M. Kellog, John Davidge, Nelson F. Underwood, and J. C. Menhennett.  William Kingsbury, the contractor who built the church, was married to Lyman's sister, Mahala.  The Church was dedicated in 1861 by the Rev. William Wyatt.

When religious services commenced in the Church, classes from Jerusalem with 28 members, Jericho with 19 members, and Little York continued as part of the Lake Como class.  The first baptisms occurred in 1860.  The babies baptized were Charles Wesley Stanton, the son of Martha and David H. Stanton, and Phoebe Jane Cargill, the daughter of Betsey and Porter Cargill.  The first wedding ceremony was also celebrated that same year when Abram Allen and Rehoda Haynes exchanged vows.

At the time of the organization of the Lake Como Methodist Church, there were four churches on the Tallmansville Charge: Starrucca, Tallmansville, Little York, and Lake Como.  In 1868, the pastor's salary was $500, which was divided between these churches.  By 1869-70, the charge included Stanton Hill, now named Shehawken.

In May of 1960 the Ladies' Aid Hall was moved to the present site.  The construction of the Centennial Memorial Hall totaled $13,500.  The project was partially funded through a $6000 loan secured from Lillian Miller at rate of 4% and an additional $1500 from Leonard Hempstead at 4%.

Today we refer to the addition as the Fellowship Hall.

The Erection of the Steeple 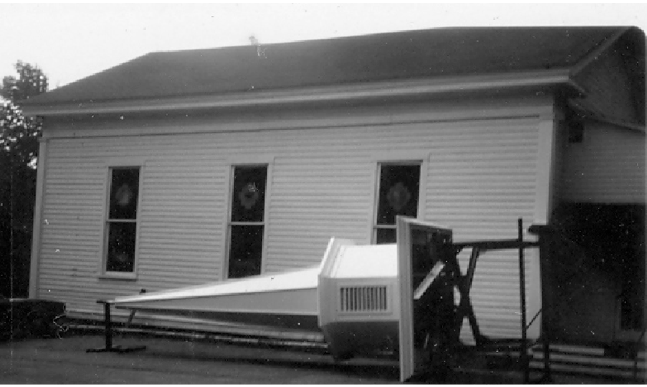 The membership embraced the reconstruction project and pledge commitments were received on Thanksgiving Sunday.  It was reported in October of 2003 that gifts given or pledged amounted to $46,450.

When the sanctuary was lifted from the old foundation, rotted floor beams in the sanctuary were discovered and were repaired and reinforced.  The digging for the foundation began, followed by the pouring of the footers.
The rain was a constant challenge throughout the construction of the foundation and basement.  Burt Lee & Son Construction Company  faced numerous difficulties, but the rain continued to be an everyday occurrence.
Lifting the church caused the stained glass windows and plaster walls to crack. The windows were repaired and plaster was replaced. In July, the Kasmark & Marshall Co. agreed to restore the stained glass windows including the removal of the glass from the wooden sashes, scraping, priming, caulking and painting the sash.  The glass was cleaned, while the broken and mismatched glass was replaced and the glass reassembled with new lead and solder.

The windows were then reinstalled.  The six windows in the sanctuary cost $1200 each, while the two windows in the Narthax cost $1400 each, totaling $10,000.  This project was funded by the United Methodist Women, the Memorial Fund, and through private donations.  Restoration plaques were affixed to each window.
New sheetrock was installed throughout the  sanctuary, followed by a top coat of plaster.
After all of the extensive repairs, it was decided to replace the carpet, and to repair and paint the woodwork and pews.  The repair work was done by Church members.  Help with the  painting came from members and the Waymart Correctional Facility prisoners.  The Shehawken Church donated $2500 to be used for new carpeting.
A rededication service took place on May 23rd, 2004.  Rev. Leon Frank led the Worship Service.  Stan Hadley, Administrative Council Chair, presented the building.  Seven previous pastors attended the service and shared their Lake Como memories.  In attendance were Rev. Jose Valencia (1955-57), Rev. Richard James (1957-60), Rev. Donald Schalk (1962-64), Rev. Jonathan King (1973-74), Rev. Edward Furman (1982-87), Rev. George Gallandorm (1994-96), and Rev. Yvonne Perry (1996-2001).